NASA’S newest telescope has captured a dazzling image of one of the cosmos’ greatest spectacles.

The James Webb Space Telescope (JWST) spotted a near-perfect “Einstein Ring”, a bull’s-eye pattern that forms when light from a galaxy or star passes around another massive object.

The formation – a halo of orange light surrounding a blue dot – formed 12billion light years from our planet.

Light from a distant galaxy known as SPT-S J041839-4751.8 is bending around another closer to Earth.

The image was created using data captured by James Webb’s MIRI detector, which is sensitive to infrared light.

It was later colourised by Reddit user u/Spaceguy44, who shared it on the forum website last week. 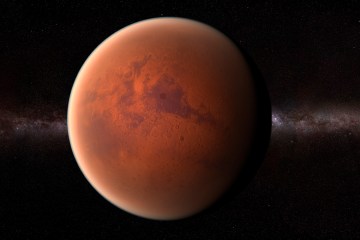 Hundreds of Einstein rings have been spotted by scientists down the years, and James Webb – Nasa’s newest and biggest infrared telescope – can capture them in unprecedented detail.

First predicted by Albert Einstein in 1915, the rings appear when two galaxies are almost perfectly aligned when viewed from Earth.

Light from the more distant galaxy bends around its closer counterpart, forming an elegant circle around it.

It’s one of the more eye-catching examples of gravitational lensing, in which the gravitational field from a massive object warps space and deflects light from a distant object behind it.

The phenomenon allows the more distant object to be seen, enabling the visualisation of objects that are otherwise too far away for telescopes to make out.

Spaceguy44, who collects publicly available data from JWST and turns them into images, explained how the ring formed.

“We wouldn’t be able to see J0418 if it weren’t for the light-bending properties of gravity.

“Without the lensing effect, the galaxy would probably look like most distant galaxies: a small blob of light.”

Nasa released the first images of our universe from James Webb, which is about half the size of a 747 aircraft, in July.

Since then, the telescope has captured stunning snaps of supernovae, exoplanets, and Jupiter’s northern and southern lights.

James Webb, which was built with the help of the European Space Agency, can see deeper into space than any telescope before it.

That allows it to effectively peer back in time by viewing light that has taken billions of years to reach our planet.

Scientists hope that these observations will expand our understanding of the early universe.

Find out more about science

Want to know more about the weird and wonderful world of science? From the Moon to the human body, we have you covered…