JAKE PAUL’S girlfriend Julia Rose said Tommy Fury will use Molly-Mae’s PREGNANCY as excuse not to fight his boxing rival.

The celebrity fighters have TWICE signed to face each other, but both times Fury was withdrawn.

Firstly, he suffered a rib injury last December before running into US visa issues ahead of their rescheduled August date.

But Paul recently revealed talks to attempt to revive the bout for a THIRD time – in February in the UK – are ongoing.

Although his podcast host and partner Julia said: “When does it come into play that whole, ‘Fool me once, shame on you, fall me twice, shame on me?’

“This is now the third time that you’re gearing up to fight this guy. 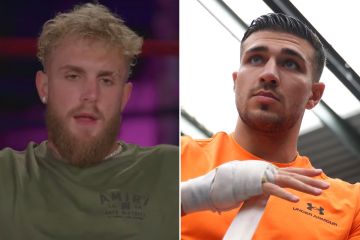 “He has made it seem like he is fully in and committed to fighting you every single f***ing time until it’s the last minute.

“Why do you think they literally waited until press conference to find out he couldn’t come into the f***ing United States?

“You know way longer and it’s always been last-minute too. Maybe I’d believe it if they found out or whatever.

“But it’s always last-minute, he gets all the hype leading up to the fight and then he drops out.”

Paul responded: “I think parts of it are shady, I don’t think we’re getting the full truth on everything.

“But regardless, it’s a great matchup and I really want to knock him out.”

Julia replied: “I think it’s a great matchup and I really want to see you knock him out too.

Tyron Woodley, 40, replaced Fury, 23, last December and was knocked out in his rematch with Paul, four months after losing on points.

At that point, it added to KOs over YouTuber “AnEsonGib”, ex-NBA player Nate Robinson, 38, and retired UFC fighter Ben Askren, 38.

It leaves him still yet to face an opponent with prior professional boxing experience, but that changes on October 29.

Paul, 25, returns in Arizona against UFC legend Anderson Silva, 47, who also has a 4-1 record in the ring.

Meanwhile, Fury is training to fight on November 13 in Dubai, on the undercard of the exhibition with Floyd Mayweather, 45, and YouTuber Deji, 25.

IMF sees inflation expectations anchored in Mexico, not in Argentina

Why are Russians hesitant to get vaccinated? | Covid-19 Special