A POSSIBLE case of Ebola is being investigated by health officials in the UK.

An area of Colchester Hospital in Essex was closed overnight so staff could deal with an “infection control issue”.

The patient is understood to have raised concerns after developing viral symptoms and revealing their recent travel history.

Uganda is currently in the grip of an Ebola outbreak which has caused 141 cases and 55 deaths since September 20.

A source told The Sun the Essex hospital’s urgent treatment centre was in ‘lockdown’ as a result of the scare.

Officials at the UK Health Security Agency said it is routine to test unwell returning travellers for a variety of infectious diseases. 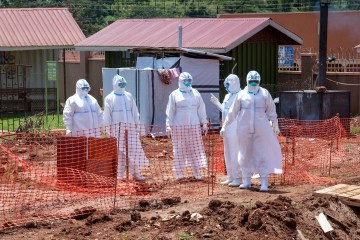 The patient is being tested for a number of viral haemorrhagic fevers, with results expected in the coming days.

Dr Meera Chand, UKHSA director of clinical and emerging infection, said: “Individuals who have travelled recently and report illness are routinely assessed by NHS clinicians for a variety of infectious diseases.”

Last month, following Uganda’s outbreak, the UK Health Security Agency (UKHSA) called for all medics to be on ‘high alert’ for patients displaying signs the virus, which has an average fatality rate of 50 per cent.

Symptoms include fever, fatigue, muscle pain, headache, sore throat, vomiting and diarrhoea, a rash, and in some cases bleeding from the gums, or blood in the stools, according to the World Health Organization.

At the time of the warning, health officials said the risk to the public was very low.

A spokeswoman for the East Suffolk and North Essex NHS Foundation Trust, which runs Colchester Hospital, said the 24-hour urgent treatment centre had fully reopened by 7am today.

“Thank you to all patients and staff for their support this afternoon when we had to temporarily close an area in the urgent care centre to deal with an infection control issue,” she said.

There has never been a case of Ebola contracted in the UK, but in 2014 two patients who contracted the bug in West Africa were treated here.

Both recovered after treatment at specialist infectious disease units, which are located at the Royal Free in London and Newcastle’s Royal Victoria Infirmary.

Ebola is a rare but severe disease that is often fatal in humans – case fatality rates have varied from 25 to 90 per cent in past outbreaks.

It’s transmitted to people from wild animals and spreads via contact with infected bodily fluids, including blood, faeces, semen and vomit.

Ebola was first identified in 1976 in two outbreaks, one in what is now Nzara, South Sudan and the other in Yambuku, in the Democratic Republic of Congo, then Zaire.

The 2014-16 outbreak in West Africa was the largest since 1976, originating in Guinea in March 2014 and spreading across land borders to Sierra Leone and Liberia.

Cases were recorded in Nigeria, the US, UK, Spain and Italy.

There were 28,616 suspected, probable and confirmed cases in Guinea, Sierra Leone and Liberia, and 11,310 deaths.

The Ebola virus disease – previously called Ebola haemorrhagic fever – is a viral infection that occurs in humans and primates.

The virus is part of the Filoviridae family, which also includes the Marburg virus.

It was first detected in regions close to the River Ebola, which gave the disease its name.

Currently, the only vaccines available are for the Zaire strain of the virus and have been used to control outbreaks in Guinea and in the Democratic Republic of the Congo.

There is currently no licensed treatment or vaccine available in the UK.

People who have the infection are treated in isolation in intensive care.

What are the symptoms of Ebola?

The virus has an incubation period of two to 21 days, meaning symptoms can take up to three weeks to appear from the time of infection.

Early symptoms of Ebola include:

They are similar to those of other diseases, making diagnosis tricky in some cases.

Later, as the disease progresses, it can cause: