A MAJOR change to vaping rules is set to come into place, ministers have announced.

The sale of e-cigarettes will now be banned to under-18s, the Irish government said.

Across the UK, vaping and e-cigarettes come under the same law as smoking.

This law states that it’s illegal to sell any tobacco products to someone under the age of 18.

Data from Action on Smoking (ASH) previously revealed that the number of kids vaping has increased. 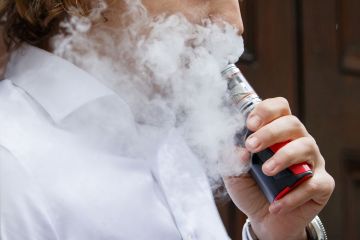 The products are increasingly marketed at kids, with it previously having been reported that manufacturers were using enticing colours and packaging to lure in a younger audience.

Now, cabinet ministers have also agreed to prohibit the sale of vaping products from self-service vending machines as part of a raft of new regulations on the sale and advertising of nicotine inhaling products.

Health Minister Stephen Donnelly said the measures were designed to protect children and young people from starting to vape.

The new proposals were agreed earlier this week and will prohibit e-cigarettes from being sold on temporary or mobile premises and at places or events for children.

Advertisements for e-cigarettes will also be banned on public transport, in cinemas and near schools.

Other measures will include suspension periods for retailers convicted of offended and the introduction of fixed penalty notices.

The proposals will be incorporated into the Public Health (Tobacco and Nicotine Inhaling Products) Bill which is being drafted.

It is expected to be finalised and published by the end of the year.

Mr Donnelly said: “We recognise that nicotine is a highly addictive drug, and we are acting today to make these products less accessible to our young people and to remove the advertising for these products from our children’s everyday lives.”

Junior minister Frank Feighan, who has responsibility for public health, said e-cigarettes are of “no benefit” to children and young people.

“Tobacco smoking continues to kill approximately 4,500 people in our country each year,” he said.

What are vapes and how to they work?

THE NHS says vapes or e-cigs are far less harmful than cigarettes, and can help you quit smoking for good.

Guidance states that the devices allow you to inhale nicotine in a vapour rather than smoke.

Experts said: “E-cigarettes do not burn tobacco and do not produce tar or carbon monoxide, two of the most damaging elements in tobacco smoke.

“They work by heating a liquid (called an e-liquid) that typically contains nicotine, propylene glycol, vegetable glycerine, and flavourings.

“Using an e-cigarette is known as vaping.”

The NHS said you will not get the full benefit of vaping unless you stop smoking completely.

If you need help to stop smoking or vaping then you should see your GP.

“We recognise that nicotine inhaling products are used by some adult smokers to assist them to quit tobacco smoking.

“However, we are clear that these products are of no benefit to our children and young people or to non-smokers and that is why we are taking this action today.”

The new legislation will help regulate any product that can be used for the consumption of nicotine-containing vapour or any component of that product.

Recent data from NHS Digital found that kids under the age of nine are being taken to hospital with breathing conditions linked to vaping.

Professor Andrew Bush, of the National Heart and Lung Institute, said: “Public Health England have stated they are 95% safer than cigarettes. There is no data that supports that, it is all based on a sort of expert consensus.

“I feel very strongly that our generation of children is being seduced into nicotine addiction.”

Earlier this year the Sun on Sunday revealed the overall number of admissions recorded by hospitals linked to vaping has nearly doubled in 12 months.

Although vaping is regarded as being far safer than smoking there are growing concerns about the emergence of stronger and stronger varieties of vapes.

Despite the fact you need to be 18 to buy a vape, many are aimed at children and teens who can easily buy them online without any age-checks.

What is ‘grey area boozing’ and how do you know if you have a problem?